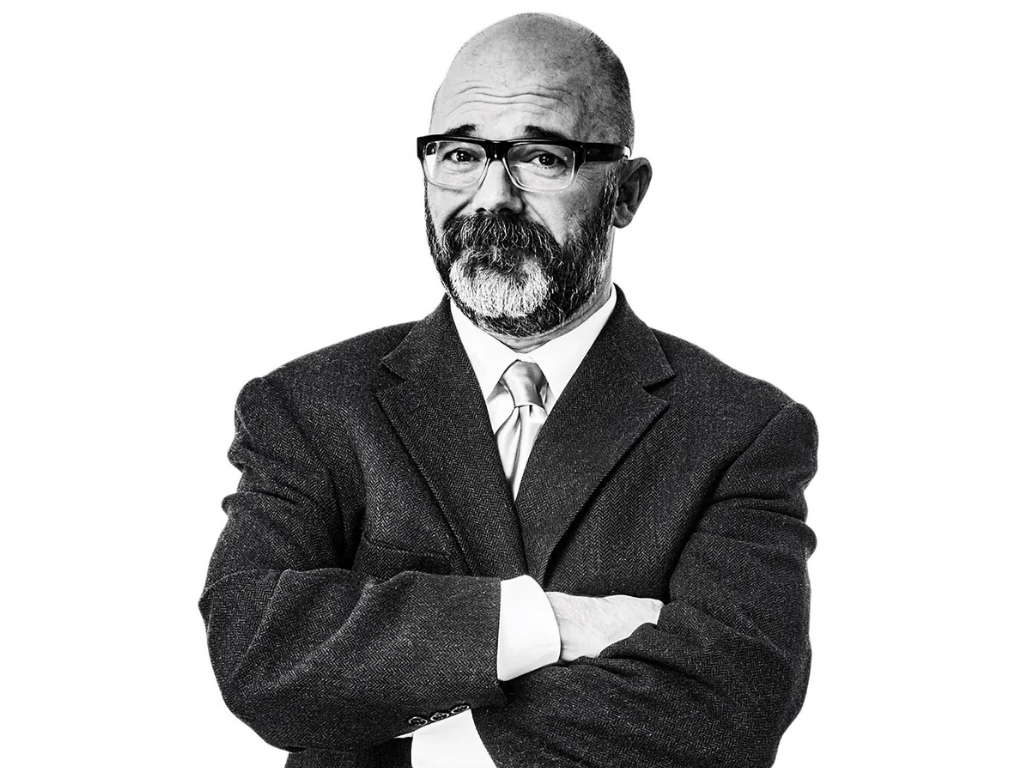 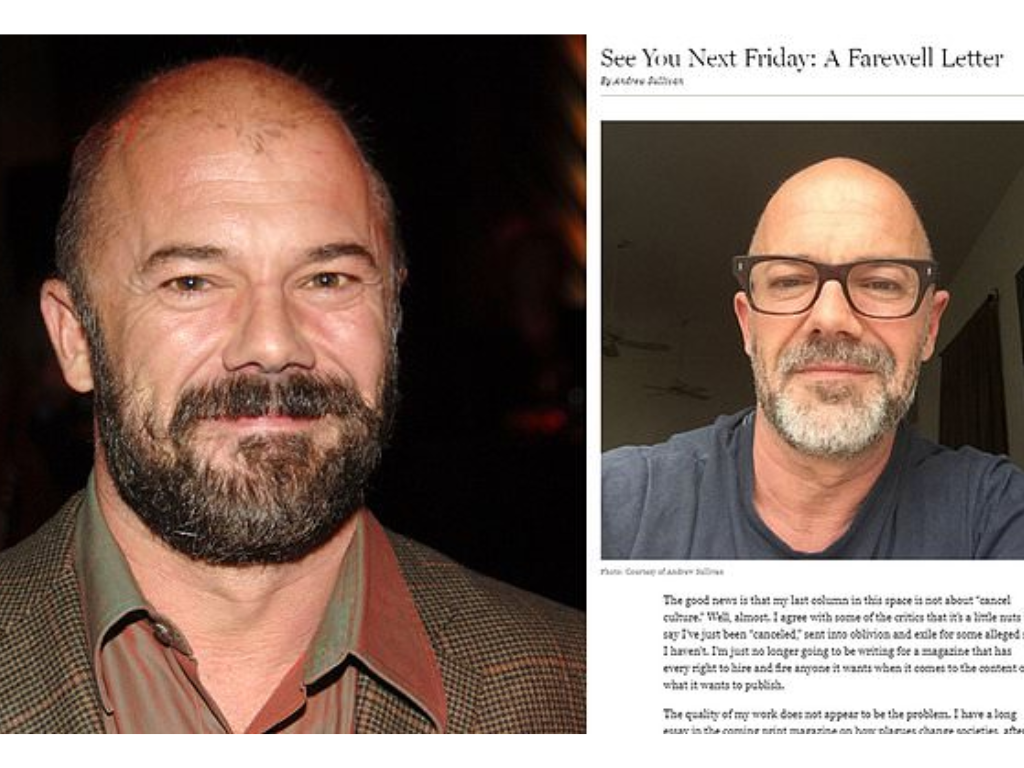 He has bemoaned the lack of diversity in mainstream news media. According to Sullivan’s final column for the magazine where he has worked for the past four years, a majority of staff no longer wish to be associated with him due to his criticisms of critical theory and woke culture.

According to the self-described ‘anti-Trump conservative’, some staff and management had come to believe that writers who do not conform to critical theory are causing harm to their co-workers “by simply existing in the same virtual space.”. According to him, the alternative media must fill the void if the mainstream media ceases to offer a diversity of opinions.

On Wednesday, Sullivan announced that he was leaving Vox Media’s magazine and that the reasons for his departure were self-evident. He made this announcement only weeks after the magazine allegedly prohibited him from writing about the riots across the country following the death of George Floyd. 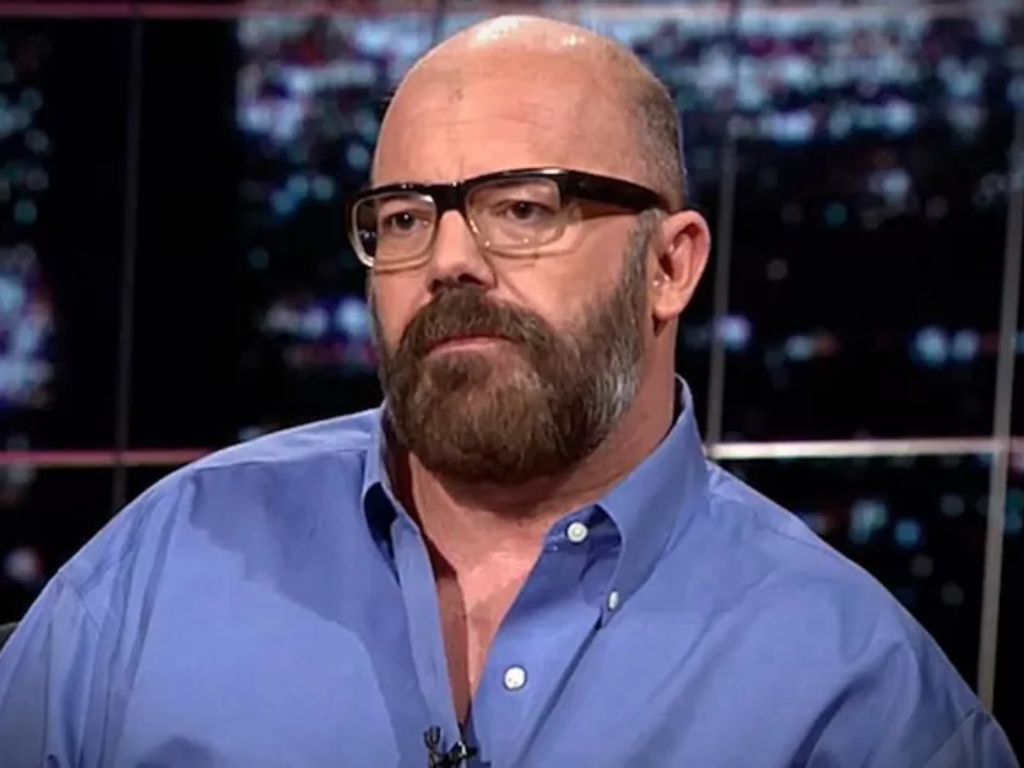 Additionally, the resignation was announced on the same day that New York Times opinion editor Bari Weiss announced she had resigned in a scathing resignation letter in which she criticized the newspaper for fostering an ‘illiberal environment’ and allowing her to be bullied by colleagues for ‘wrongthink.’

On Friday, in his final column for the magazine where he had worked for four years, Sullivan expressed concern that a ‘critical mass’ of staff at the company no longer wish to associate with him as a result of his criticisms of critical theory and woke culture.

On Wednesday, Sullivan announced that he would be leaving the Vox Media-owned magazine and stated that the reasons for his departure were ‘self-evident.’ 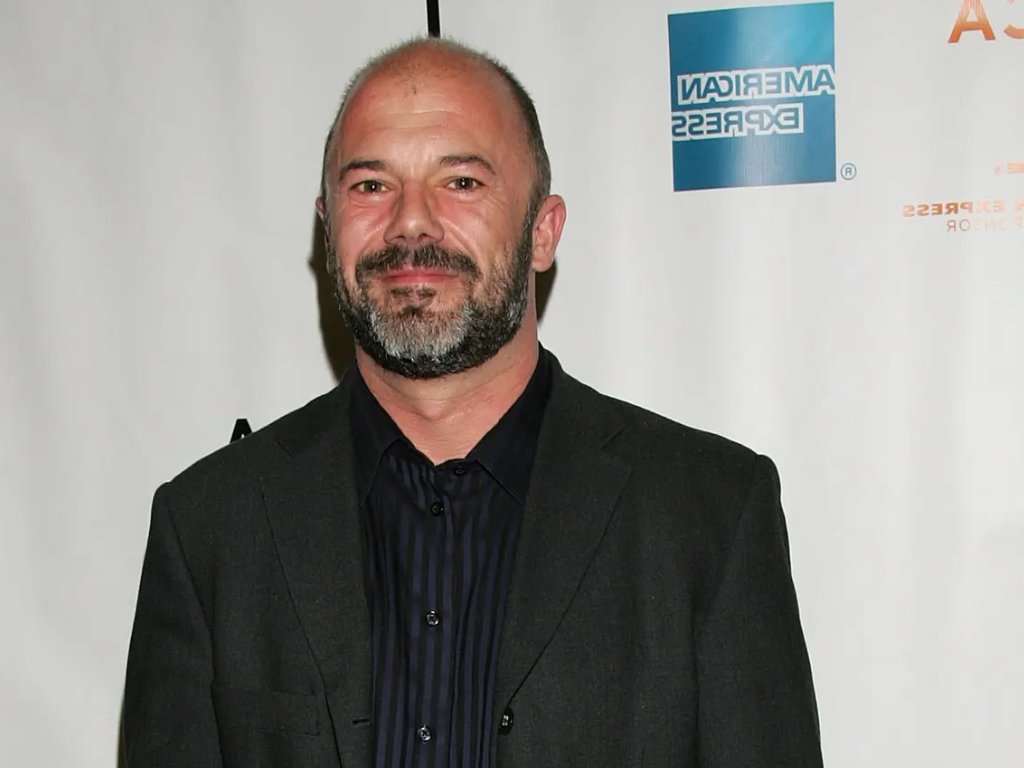 According to his final column, Sullivan stated that he was ‘proud and happy’ to have been a part of his venture with the magazine and had no complaints about the way he interacted with his editors and fact-checkers.

Essentially, what has happened is that a critical mass of the staff and management at New York Magazine and Vox Media no longer wish to work with me, and in times of tightening budgets, I’m a luxury item that they cannot afford. He wrote, “And that is entirely their prerogative”.

They seem to believe, and this is becoming increasingly accepted in mainstream media, that any writer who does not actively engage in critical theory of race, gender, sexual orientation, and gender identity is harming coworkers physically by existing in the same virtual space as them. ‘

Actually attacking, and even mocking, the ideas and methods of critical theory, as I have done continually in this space, is in conflict with Vox Media’s principles. According to my understanding, that is the reason I am out of here.

He said he also plans to vote for Joe Biden.

In my opinion, if this type of conservatism is so offensive that many of my colleagues feel embarrassed about working at the same magazine, then I have no idea what type of conservatism could ever be tolerated. It’s fine with me. As a free country, the mainstream media has the right to cut ties with even moderate anti-Trump conservatives who won’t bend the knee to critical theory’s version of reality.

The Dish, the blog Sullivan shut down in 2015 when he stopped blogging to work for New York magazine, was relaunched in Sullivan’s final column. Having the freedom to write “without being in a defensive crouch” was something he missed.

After Bari Weiss announced her resignation on Tuesday, Sullivan’s announcement came as a result of her scathing resignation letter that attacked the newspaper for fostering an illiberal environment and allegedly allowing her coworkers to bully her for ‘wrongthink’. 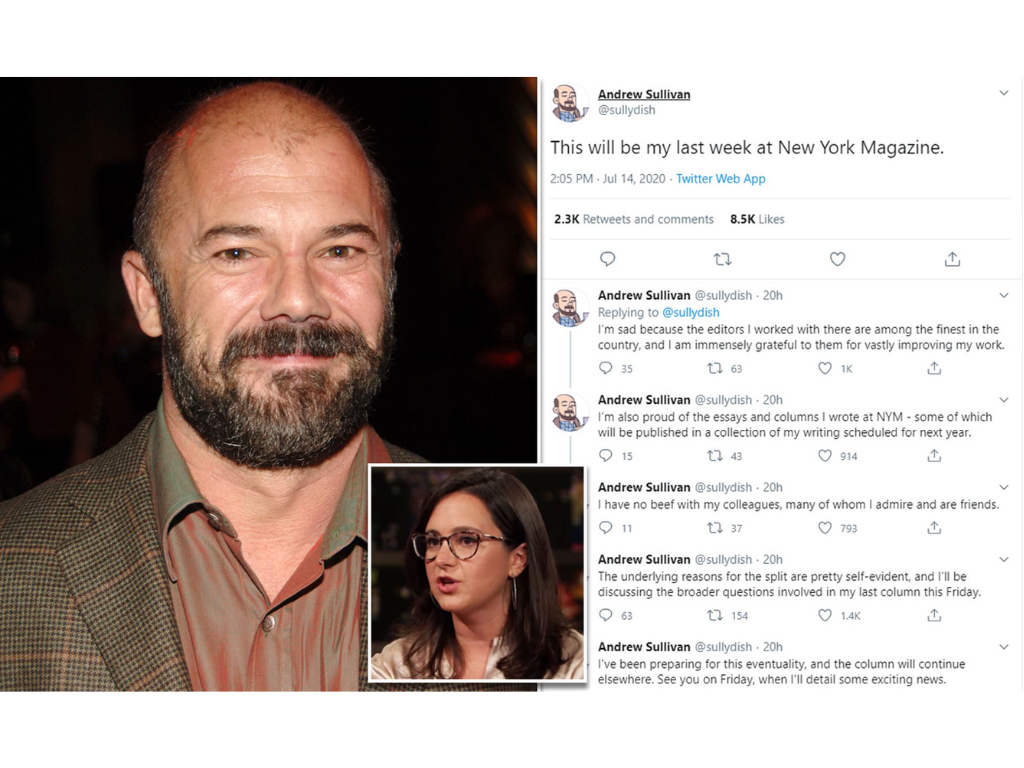 In a scathing resignation letter, New York Times opinion editor Bari Weiss said on Tuesday that she had resigned from the newspaper after it fostered an ‘illiberal environment’ and allowed her coworkers to bully her for ‘wrongthink’.

Openly gay, Andrew Sullivan lives in Washington DC and is a conservative political commentator. He was born and raised in the UK but has lived in the United States for many years. In 2016, he became the editor of New York magazine after serving as an editor at The New Republic for five years. 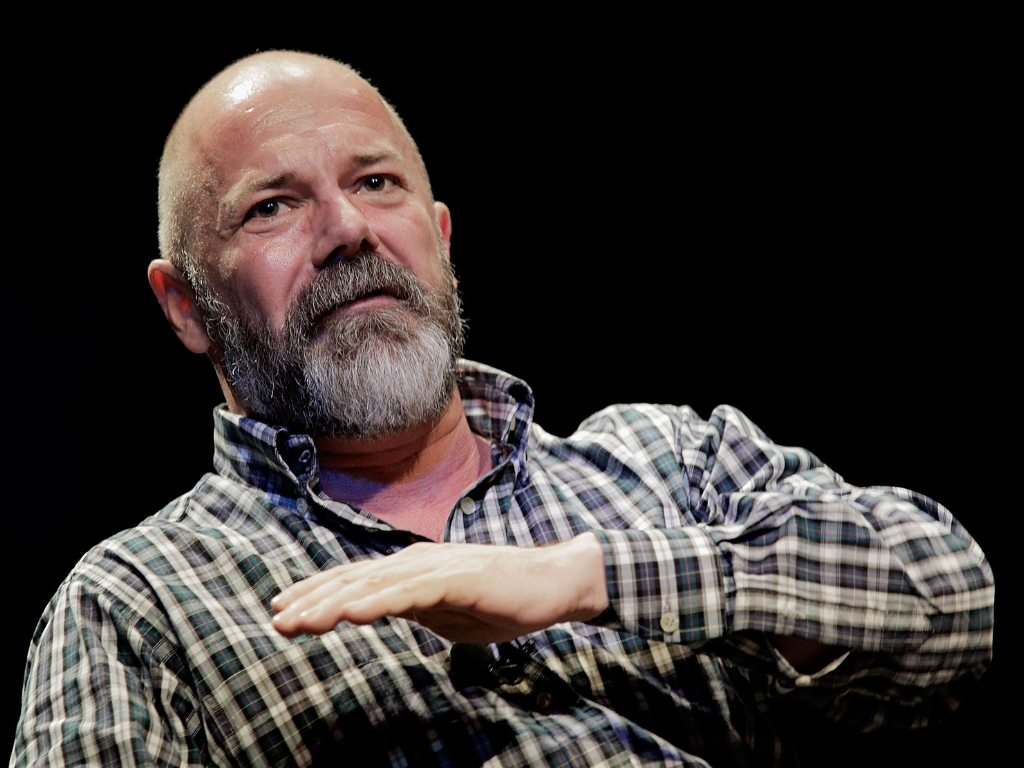 Before becoming independent, he founded the Daily Dish, a political blog that was published by Time and The Atlantic. As well as writing six books, Sullivan retired from blogging in 2015 and became a writer-at-large at New York magazine.

As Sullivan stated in his column, he does not believe that he is simply being ‘canceled’ because he has left the magazine.

According to some critics, it is a bit bizarre to claim that I have just been ‘canceled,’ exiled, and banished for alleged sins. No, I have not. I will no longer be contributing to a magazine that has the right to hire or fire anyone it wishes when it comes to the content of its publications,’ he explained.

Born and raised in the United Kingdom, Sullivan has lived in the United States for decades. He has previously expressed concern that a ‘woke’ culture is crowding out dissenting viewpoints. On June 12, Sullivan wrote an article entitled ‘Is There Still Room for Debate? ’.

According to Sullivan, society’s evils are a result of discrimination against blacks, and the campaign to quell dissent from that idea is becoming increasingly furious.

According to him, if you did not display a slogan or symbol displaying your wokeness on Instagram or Facebook in the last two weeks, you instantly came under suspicion. Additionally, New York magazine faced backlash last month for allegedly prohibiting Sullivan from covering anti-racism protests across the country.

In mid-June, Sullivan tweeted that his column would not appear, and Cockburn, an American blog run by The Spectator newspaper, said editors did not want him to write about the riots.

According to the blog, Sullivan was required to have his work vetted by sensitive junior editors before it was published, according to a source close to New York magazine. The magazine and Sullivan did not comment at the time. New York magazine’s editor-in-chief, David Haskell, informed reporters earlier this week that they had agreed that Sullivan’s ideas and the magazine’s were no longer compatible.’

Andrew and I agreed that his editorial project and the magazine’s, although they overlapped in many aspects, were no longer a good match,’ he stated in a memo to staff. Although I often disagreed with him politically, I also found it valuable to publish work that challenged my thinking. In this magazine, I strive to create an environment that is civil, respectful, and intellectually honest.

I believe there is a way to write  about some of the most political topics in American life from a conservative perspective, while maintaining our values. Haskell went on to say that posting conservative commentary in 2020 is “hard to do right” and that “thoughtful, well-meaning people might come to different conclusions.”

Sullivan, who joined The Times in 2017, left the magazine the same day. Weiss revealed that she would resign and accused the newspaper of only publishing stories that “satisfy the narrowest audience”.

President Donald Trump weighed in on Weiss’ resignation on Wednesday when he tweeted that people were fleeing The New York Times ‘Wow. @nytimes is circled. The real reason is that it turned into fake news.

They never covered me properly – they screwed up. People are fleeing, what a waste! Weiss took aim at Sulzberger in a lengthy resignation letter sent to the editor of The New York Times  A.G  and posted on its website, saying the paper was one of  the outlets that now betrayed its standards and ignored its principles

Weiss, who has previously said he doesn’t support Trump, went on to say that people’s opinions  on Twitter have become the paper’s “final editorial.” Weiss, who  dated SNL’s Kate McKinnon while studying at Columbia University, also accused the outlet of creating a “hostile work environment” for employees who largely lacked centre-right opinions. left.

This mentality, she claims, led to her being constantly harassed by colleagues for “trying to think badly herself”, who  called her “a Nazi and a racist”. “It doesn’t take courage to come across as a centrist in an American newspaper,” Weiss wrote.